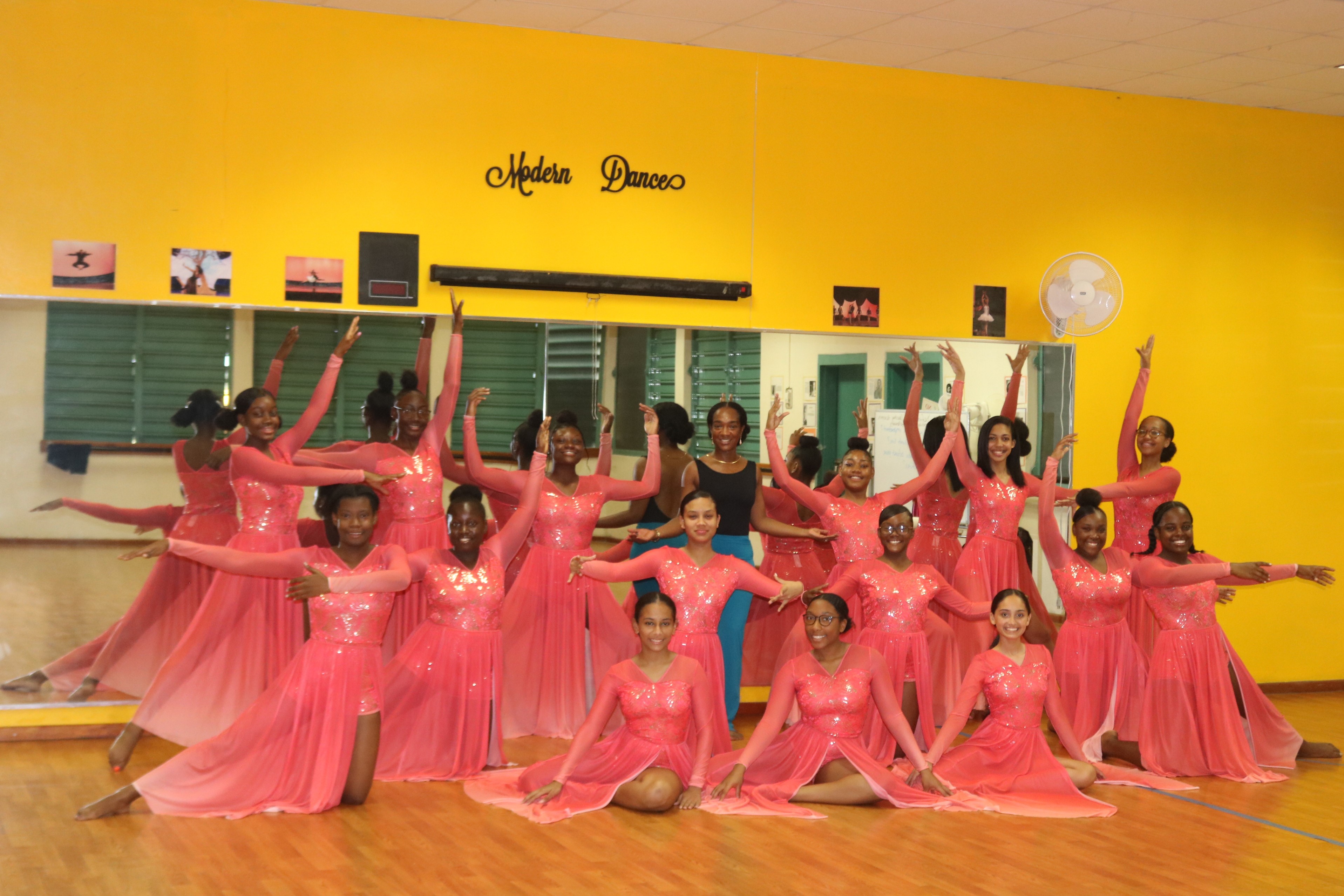 Thanks to the efforts of physical education teacher, Essi Gaston-Edwards, who also instructs the new Modern Dance I and II classes at Complex, 19 students in grades 9-12 were introduced to the basic techniques of Contemporary, African and Hip-Hop dance in her Modern Dance I course during the first and second quarters of the school year.

At the students’ recent final exam recital, attended by their parents and school staff, Gaston-Edwards said she was “impressed” with how much the students had learned from September to early January. As part of the final performance assignment, they were required to choreograph their dances and create their own costumes.

“They really surprised me and I was impressed with how well they performed,” she said. “They were a bit hesitant, but they did well. They have grown tremendously.”

In addition to teaching her students basic dance techniques, Gaston-Edwards also taught lessons on the origins of modern dance, dance theory, and required students to complete several research papers on various dance genres and leading choreographers. Furthermore, in order to get them comfortable with performing on stage, Gaston-Edwards kept up an active public performance schedule for students. Notably, they performed at Island Center for the Performing Arts during “The Nutcracker” presentation last Christmas, at school sporting events, and at a schoolwide memorial service for late Complex Math teacher, Kodzo Ekpe.

The students were also required to submit a final paper titled, “My Journey in Modern Dance.”

Student Aurys Herrera credited the class to teaching her much more than dance moves.

“Partaking in this class has provided me with confidence and boosted my self-image, as well,” she said. “I have also gained friendships that have helped me with my doubts during the semesters.”

As for her journey in modern dance, Tiyanah Dow said the class met her expectations.

She added, “As a Crucian, I grew up surround by dance and music. I always loved that about my island, but that was not the only reason why I chose to join the class. As an aspiring actress, knowing at least the basics of dance would make my college years a little easier.”

Jada Joseph admitted that, at first, she didn’t know what to expect from Gaston-Edwards, but her fears soon dissipated.

“To be honest, I didn’t know what to expect from her, but as the days and weeks went by, I realized that she was once in our shoes—just learning how to dance—and she honestly just wants us to try our best,” Joseph said. “Now, I’m not so terrified and scared, but I know if I ever need help in any dance, I could come to her because that is what she’s there for.”

A self-described natural dance enthusiast, Sirnila Joseph said she was overjoyed the course was being offered this year.

“As a child, I always loved dance—whether in actuality or on television, I was fascinated by dance,” she said, adding, “so when I heard I could take the class, I could not pass up the opportunity.”

“While taking this class, I was able to explore four different genres of dance. I did not expect to cover so many genres, especially in a class with other students who have never been exposed to dance before,” she said. “I am glad I was able to not only execute the various genres, but also learn about famous choreographers and dancers from each genre.”

“My final performance was the most important to me—hearing the news of Mr. Ekpe’s passing came as a shock and I refused to believe that it actually happened,” she said. “Mr. Ekpe played a crucial part in my adjustment to high school. He was the reason that I never shied away from making mistakes and always kept an honor student mentality. So, performing at his memorial was my way of giving tribute to his life and expressing my final goodbyes.”

The students’ sentiments on the quality of the class should come as no surprise—Gaston-Edwards is professionally trained at the renowned University of the Arts in Philadelphia, she is also a dance instructor and company member at St. Croix’s Caribbean Dance School, and she began her dance career under the tutelage of local legend, Lisa Lendhardt.

Another crop of students is currently enrolled in Gaston-Edwards’ Modern Dance I course for the third and fourth quarters. Modern Dance II will be offered in the fall of 2020, and introduce students to leaps and turns, as well as to jazz.