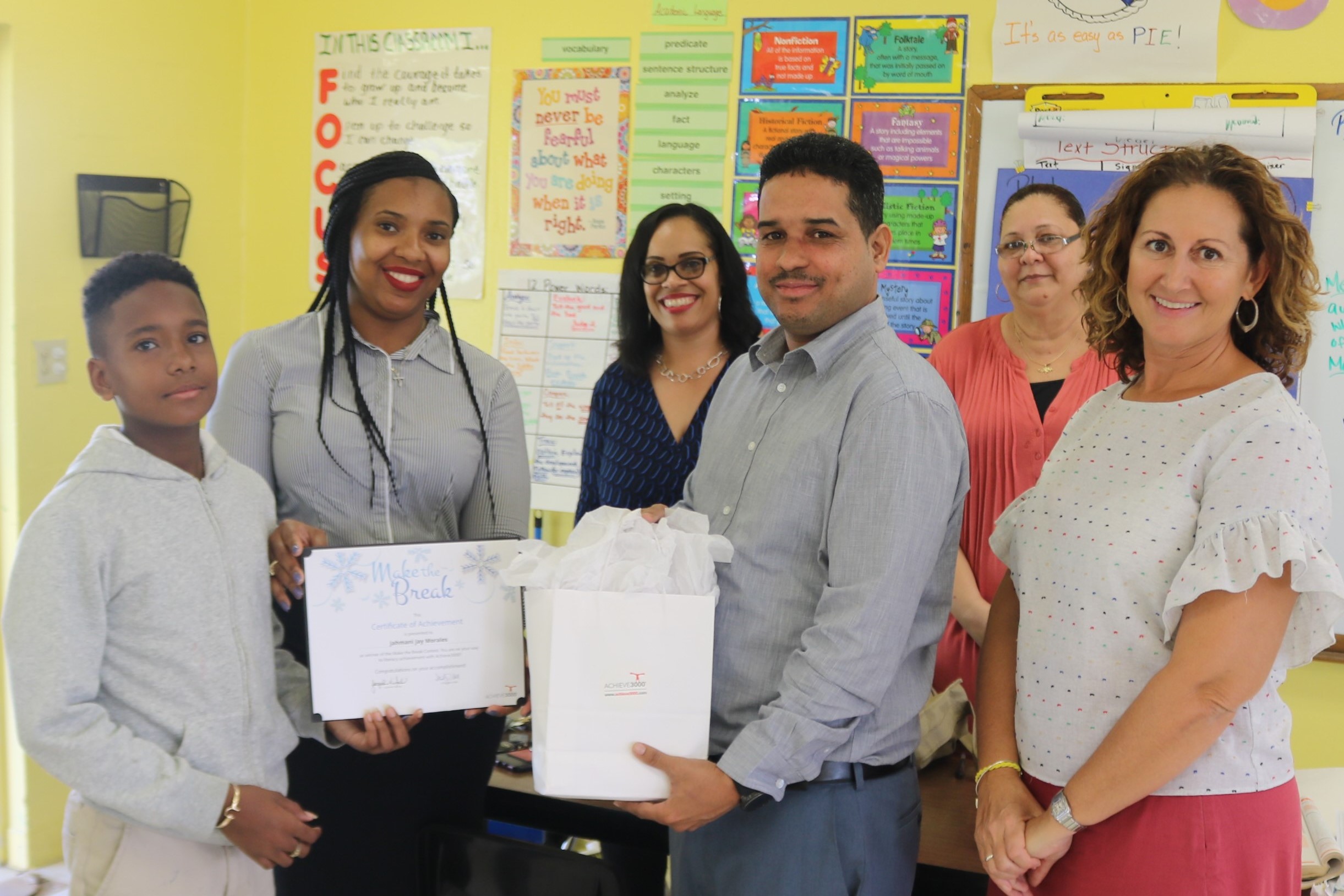 Jahmani Jay Morales, a sixth grader at Eulalie R. Rivera K-8 School, is the  territory’s winner of Achieve3000’s Make the Break Contest, held Dec. 21 to Jan. 5, which encouraged students to continue using Achieve3000’s literacy platform over the recent holiday break in order to maintain the growth they achieved during the first semester.

For his outstanding performance of earning a score of 75 percent or higher, Morales was awarded Sony Extra Bass headphones, which were presented to him by district officials and Julie Eckard, Achieve3000’s territory representative, on January 29 at the school.

As part of the contest, students were required to complete at least five lessons on Achieve3000’s KidBiz3000, TeenBiz3000 or Empower3000 online platforms. Morales, who describes himself as an avid reader, surpassed the required reading amount.

When it comes to reading, Morales said he enjoys the activity because it’s “interesting.” He encouraged his fellow students to “come to school, work hard, try your best, and never give up.”

English Language Arts teacher, Jacqueline Vitalis, said Jahmani and her other sixth-grade students began using Achieve3000 after the Thanksgiving break. Students read stories on a variety of topics with varying levels of difficulty and answer questions about what they have read.

“I was informed that [Achieve3000] was only for the seventh and the eighth graders at the school, but some extra funds were available, and I requested if I could get my sixth graders on after we returned from the Thanksgiving break,” Vitalis said. “I have been using it weekly with the children. They go on and they get assignments that I assign, and most of the time, they can go on and read stories that they are interested in.”

Of Make the Break, Vitalis said she encouraged her students to participate in the two-week contest.

“Over the winter break, I informed them of the contest and that they had to complete at least five articles, attaining a score of 75 percent or higher, in order to get their names included in the raffle to win,” she said.

“Some of the reading I assigned, but they could also pick topics that interest them,” Vitalis continued. “[Jahmani] did more than five articles because he is the top reader and scorer all the time for the school. He’s been working on the articles and he was able to win the Sony headphones.”

Vitalis vouches for the improvements she’s observed in her students’ literacy skills as a result of using the Achieve3000 program in class at least three times a week.

“At the end of the month, based on the number of articles students read and if they are getting that score of 75 percent or higher, their Lexile score is adjusted,” she said. “All of the students are aware of their Lexile score, they know where they are, and they work toward improving it.”